Meet Dr. Von Homer, Founder and Chief Scientist of HX Innovations, a first-of-its-kind tech startup that aims to map a client’s body to ensure that his or her biomechanics (body movements) align with the individual’s chosen footwear. This helps to not only mitigate or avoid future injury but also to fulfill movement goals while perhaps running a marathon or walking around the block with a grandchild.

HX Innovations also works directly with footwear manufacturers as a science-backed testing lab that can determine the efficiency of movement and the performance threshold of the footwear being sold to consumers. 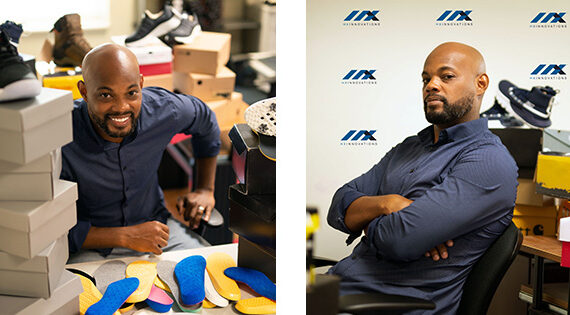 “We’re kind of like a consumer report on steroids for footwear products,” says CEO Dr. Homer. “We’ve combined my layered background in pedorthics, biomechanics, ergonomics, and neuroscience to solve problems from the feet up.” The problem being, one size does not fit all. Via the patented Homer Technique, Dr. Homer and his team of scientists and researchers have cultivated propriety software and testing protocols that tie precise human factor data into footwear.

According to Statista, American consumers contribute over 50 percent to the $180 million global footwear market. The same report cites about 16 percent of Americans say they bought their shoes from an online retailer, suggesting many shoes in many closets throughout the country were bought on looks alone. With HX Innovations on the rise, the trend could become obsolete; instead, consumers would choose a shoe based on the precise HX science attached to it.

“We want to change the game completely,” says COO Nicole Homer. “We want to reform the standard and idea of footwear because what we wear on our feet is important and allows us to maintain alignment and stability, which leads to feeling younger for longer, and allows us to sustain the lifetime of movement we all deserve.” The industry has noticed — HX has already influenced footbed designs for Adidas, Under Armour, Skechers, Carhartt, and most of the brands carried by Walmart. You can even find Dr. Homer’s face inside the Skechers best-selling arch fit shoe boxes.