Superstar restaurateur and chef Justin Sutherland has launched a tour of American Southern cuisine shaped by his upbringing in the Northern Midwest and the South and by his African-American and Asian heritage.

Justin owns multiple restaurants in the Twin Cities, though his reputation is national. You may know him from television, where he won an Iron Chef episode, competed on Season 16 of Top Chef, and is one of the chefs featured on Fast Foodies and is producer and host of Taste the Culture, both airing on TruTV/TBS. 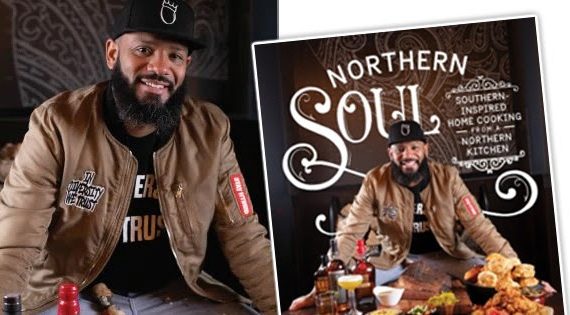 In his new book, Northern Soul, Justin shares the inspiration and foundation behind his approach to his signature Southern cooking.

Some of the recipes you will learn how to cook in Northern Soul:
• Carolina BBQ Sandwich
• Chicken and Waffles
• Ham and Greens Soup
• Creole Jambalaya
• Bourbon Pecan Pie with Maple Whip
• Signature cocktails from Handsome Hog
• Lots of spice blends, sauces, rubs, and, as they do it in the South, pickled everything!

“In Northern Soul, Justin Sutherland elevates southern comfort dishes in a unique way that speaks to the power of how food fuels us as individuals, connects to us spiritually, and forges the bonds of community.” ― Marcus Samuelsson, chef and author of The Red Rooster Cookbook

“I am covered in chills reading Justin Sutherland’s book. It’s mindful, soulful, important, and truly American—because it is a global story. We are one. We are all connected if we choose to be. With Justin’s cookbook, we all come one step closer, and one meal closer, to one another.” ― Rachael Ray, host of “30 Minute Meals” and “The Rachael Ray Show”

“Northern Soul is a stunning debut cookbook that guides the reader through fun, approachable Southern recipes shot through the prism of a Northern kitchen. Justin Sutherland has his feet planted in many places, and in several distinct cultures. This book gathers them all together in spectacular, personal fashion, proving that Justin’s motto, “In Diversity We Trust,” should be everyone’s calling card. With signature recipes like Jambalaya or Chicken and Waffles, Justin’s food is as delicious as his own personal story is compelling and inspiring.” ― Andrew Zimmern, host of “Bizarre Foods” and “Family Dinner”

“As Justin Sutherland says in this book, I, too, have always said that food is our universal language, connecting us to each other every day. But in Northern Soul, Justin takes it a step further. From the very first time he cooked real low-and-slow in his Easy Bake Oven, as a child, he’s used his cooking to transcend geography, connect with his family, and share a bit of his history, and our history, with the world. Slow down, give it a read, and get cookin’.” ― Guy Fieri, host of “Diners, Drive Ins, and Dives” and “Guy’s Ranch Kitchen”

“This book is a deep dive into soul food from a clear and fresh perspective, one that feels familiar and approachable, creative and craveable. Justin Sutherland beautifully demonstrates how food connects us all, but also is an integral part of how we can seamlessly celebrate our individuality together. I cannot wait to cook my way through this book!” ― Brooke Williamson, chef and winner of Food Network’s “Tournament of Champions”

“Justin Sutherland’s book offers the food of his heart: comforting, soulful, and full of story. To know Justin is to understand that his food truly comforts. His food, at its core, is a great big hug that makes you feel welcomed into his life. These are the kind of recipes that immediately invite you to bring them into your own kitchen and make them.” ― Kristen Kish, chef, “Top Chef” champion, host of “36 Hours,” and co-host of “Fast Foodies”

“Handsome Chef Justin Sutherland is Executive Chef at Handsome Hog in Minneapolis and now a friend. Even if we were enemies, I’d still eat his insanely delicious food. He is one of the best chefs around–and that’s saying a lot coming from me, because I’m a complete food snob. Justin’s thoughtfulness and humor are evident in every part of his wizardly food magic. Read this book and try not to eat the pages.” ― Joel McHale, actor, comedian, and host of “Crime Scene Kitchen”

“Justin Sutherland’s food is incredible and his story is even better. Northern Soul delivers classic southern flavors in an approachable, unpretentious way. In this book, Justin’s brilliance and heart show through, reminding us that the southern experience around food and culture isn’t monolithic. You really can cook this food, and you should!” ― Eric Adjepong, chef and “Top Chef” Finalist and All-Star

“Rarely does someone’s first cookbook stand out from the crowd as this one does. It is a testament to Justin Sutherland’s extraordinary culinary prowess, a multi-layered lexicon of American classics done his way. The dishes in this book are deliciously put together, with every ingredient adding another note to the symphony of flavors.” ― From the Foreword by Kwame Onwauchi, chef and author